Like so many other New Yorkers who’ve made their way to Los Angeles, Megan Rizer and Andrew Steiner came out west in January of 2015 with hopes of easier living in the land flowers and sunshine. Or as Megan so aptly put it while quoting Biggie Smalls, “We wanted to ‘rest in the west, see some nice breasts in the west, smoke some nice sess in the west.”

Sure, weather, quality of life and an endless summer lifestyle were appealing, but the move was more leap of faith than tactical. Both were working successfully in New York, Megan as a fashion stylist and later as an archivist for photographer Terry Richardson, where she acquired the name “Rizer the Organizer,” and Andrew as a painter/artist and entrepreneur. But while Biggie called New York home despite his affinity for Los Angeles, after a decade in the Big Apple, Megan and Andrew were ready to call it. They packed up what they could and without a home or work awaiting them in Los Angeles, set out on a four-week cross-country trip.

Finding a tasteful, reasonably priced place in Los Angeles seems near impossible these days with bidding wars driving up prices, and homeowners and leasers alike going the way of Airbnb, further limiting feasible rental options. But one month of tirelessly scouring Craigslist for rentals and driving around the streets of LA while crashing with Andrew’s cousin in Atwater, paid off and the couple found their perfect little 1920s craftsmen bungalow in Echo Park, complete with private backyard and an adjoining garage space—now Andrew’s painting studio.

“It was so rough finding a place, I thought I’d have to knife fight for it,” laughs Megan. “But when we saw it, we knew it was right. Everything’s renovated with a respect for the era it was built in, with beautiful cabinetry, original multi-pane windows, a mantle, arched hallways, and speaks to its period while still being modern, bright and clean- a perfect balance of integrity and a nod to what this place was originally about.”

In just over a year, Megan and Andrew have managed to live the LA dream, building a community of great friends, mostly within walking distance from their home—a comfort nearly unheard of in such a car crazy city, and finding freelance work within their respective fields. Megan even started a business, Rizer Lifestyling, offering professional organizing and interior styling services. “They go hand-in-hand—organizing and styling—you can bring in great pieces but until you have a rhythm and communication with your space and know where things fit and really make the aesthetic a lifestyle, it can all still look shitty.”

But Megan’s intuitive sense for interiors and organization wasn’t what initially drove her; early on it was fashion that piqued her interest–makes complete sense having grown up on fishing boats. Born and raised in Alaska, Megan worked on commercial fishing boats every summer with her father. “It was pretty normal. All the people around us were also fishermen and their kids were on boats. It was work but when you were lucky, when you had time, you’d tie your boats together and have beer and go for skiff rides and go adventuring. We’d hike and see lots of bears, and whales and eagles and moose. We used to lasso chunks of glacier that had fallen off and try to get them on the boats and the adults would chisel off pieces for their cocktails. We ate tons of amazing fish, halibut, crab.”

Though she continued spending summers working on boats in Alaska, at age 13, the Rizers moved far, far south to the land of Kiwis. It was in New Zealand where Megan earned a fashion design degree from Massey University and ultimately secured an internship, and soon thereafter, a full time job in New York with a fashion stylist. Though drastic in nature, leaving the pristine beauty and openness of New Zealand for the hustle and denseness of New York seemed fitting for Megan, and for years, it was.

But a much-needed break was eventually had; after a draining relationship ended, Megan quit her styling job, packed her bags and headed to South East Asia, while a friend of a friend whom had just moved to New York cared for her beloved pit bull Belly. Three and a half months later, back in New York, Megan stops by a barbecue only to cross paths with Andrew, that friend of a friend who had so graciously helped out during Megan’s vision quest. “I saw him in a completely different light this time around,” shares Megan.

Andrew had recently arrived to New York after four years in San Francisco (by way of Arizona, where he earned a fine arts degree). Things were a bit different in New York; after spending his teenage years tagging trains in Philly and anything else he could, he was getting paid to paint walls and make murals. But much like Megan, Andrew’s also a hustler and in between commissions and painting jobs, he tended bar at the Brooklyn staple, Roberta’s, and started Secret Handshake, a screen printing and graphic design firm, with a friend.

Megan and Andrew, it turns out, were cut from a very similar cloth. Their diverse upbringings (Andrew’s half Polish and moved around quite a bit growing up) and exposure to life and culture implanted a shared sense of adventure, humor, warmth and appreciation. They’re both aware of the great, long journey, of their family’s that precedes them, and of their own which continues to unfold.  And their home reflects such, with bits and pieces collected from the places they’ve lived, their individual and shared experiences, their lineage. Their home speaks a language as varied as their own, and at the core is a lightness and love that fills every corner. 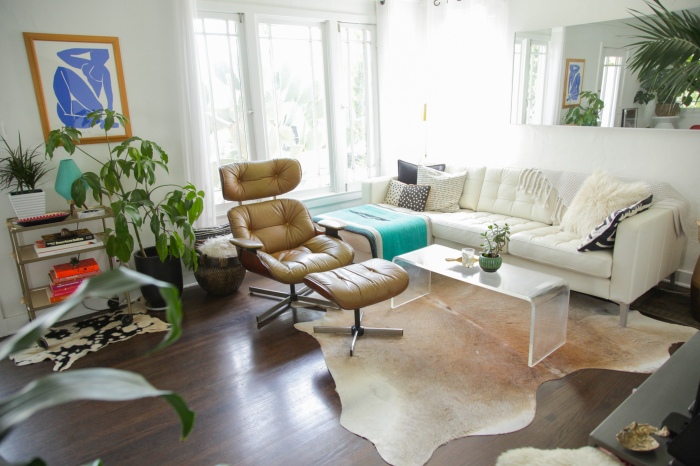 Hi and low and in-between: Original Eames chair and ottoman; lucite coffee table found on the streets of Brooklyn; Ikea sofa played up with decorative elements 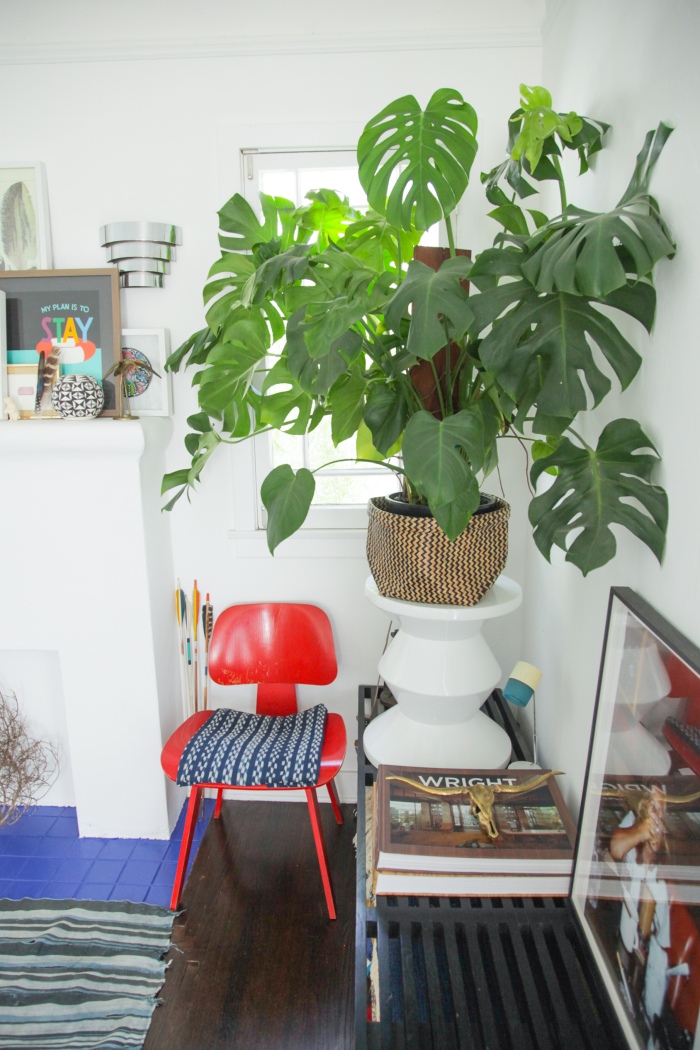 Photograph by Terry Richardson from his first show “FTW,” photos from his teenage years in Ojai, California 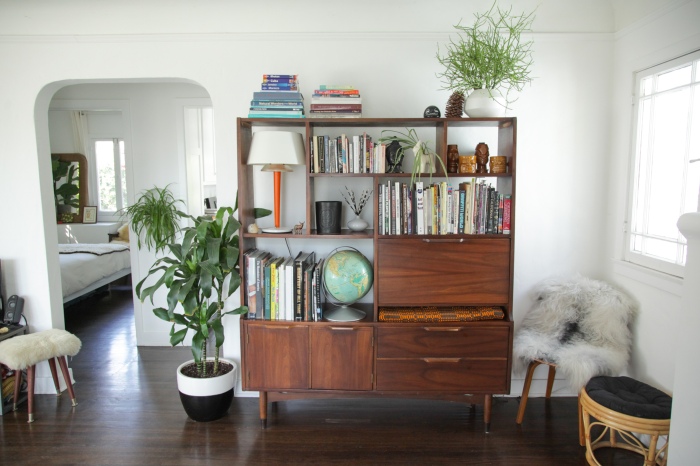 “I love texture. It’s a whole other way to communicate. There’s geometry and shape and color, and there’s texture. Texture adds so much depth and creates interesting layers” – Megan Rizer

Megan and Belly lounging in the living room; a horizontal mirror adds depth and perceived space

A view into the ethereal living room; sheep skin stool from New Zealand

Dancing Foxes print from Coral & Tusk, a gift from Megan to Andrew because he’s her red fox; Egyptian bookends found at a flea market

Zen Den: A creamy, simple palette in the bedroom let’s the plants both inside and out stand out and creates soothing vibes 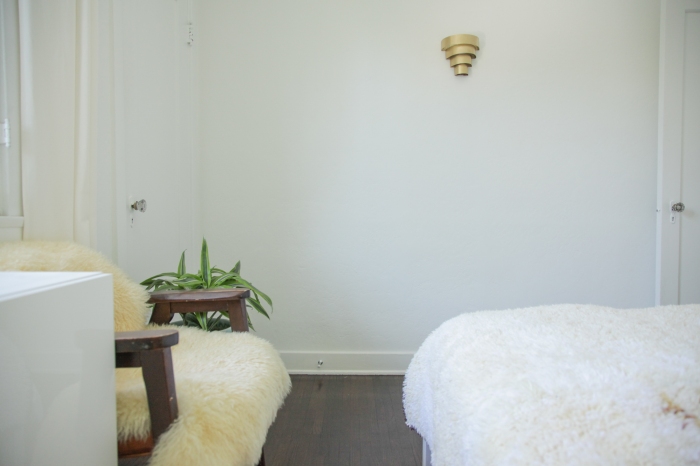 Family Ties: The throw at the end of the bed is a rug hand knit by Megan’s grandmother; Rug on thrifted chair from her grandfather 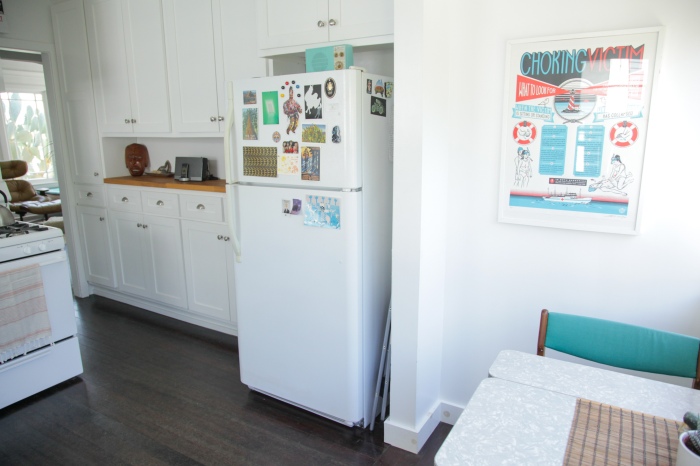 A pop of turquoise woven throughout the kitchen 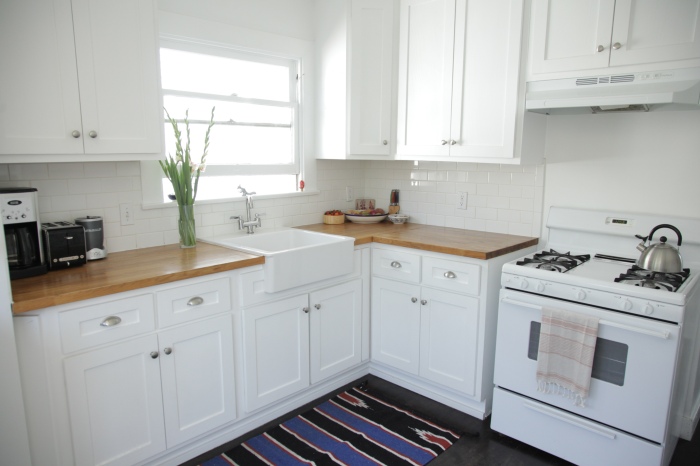 Thriving succulents and vintage mix and match chairs in the garden 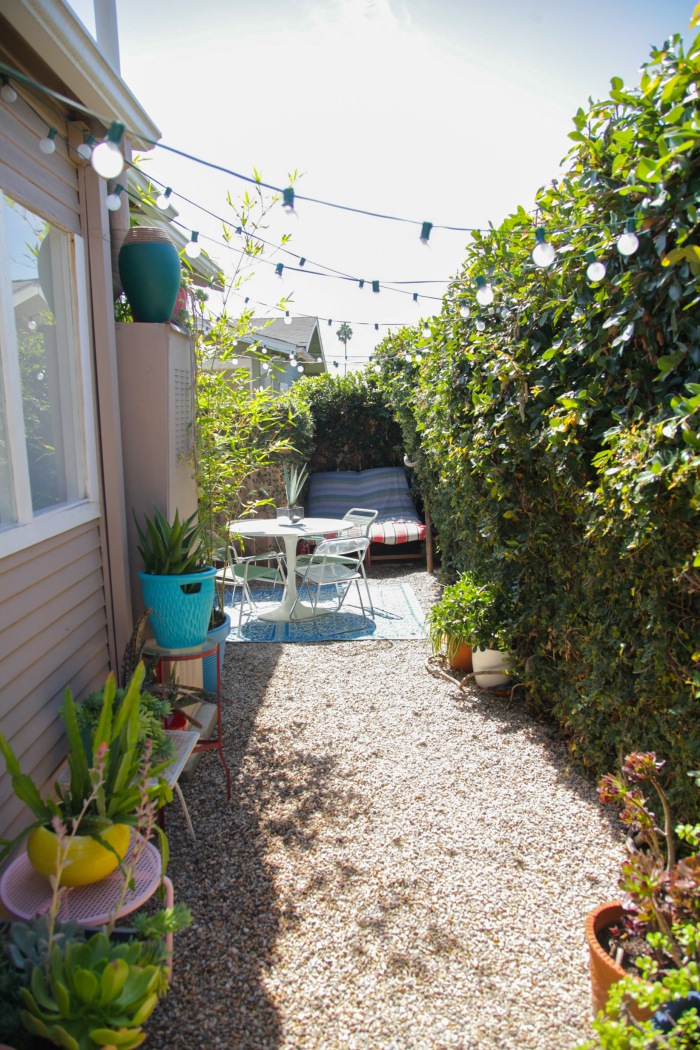 Andrew and Belly in the garage-turned-studio space

Three eyes are better than two. A few of Andrew’s paintings 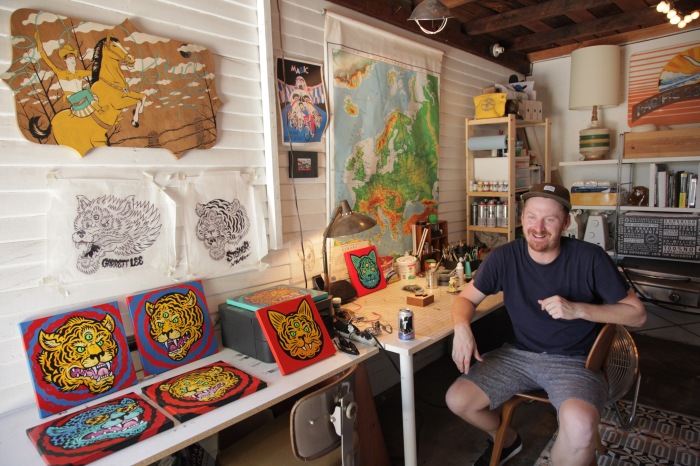 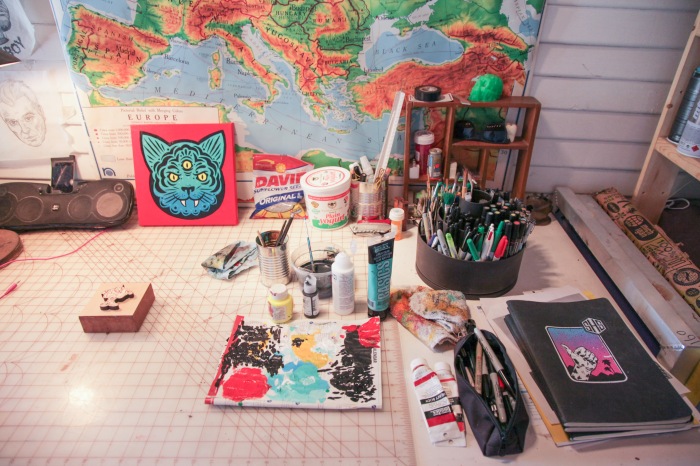